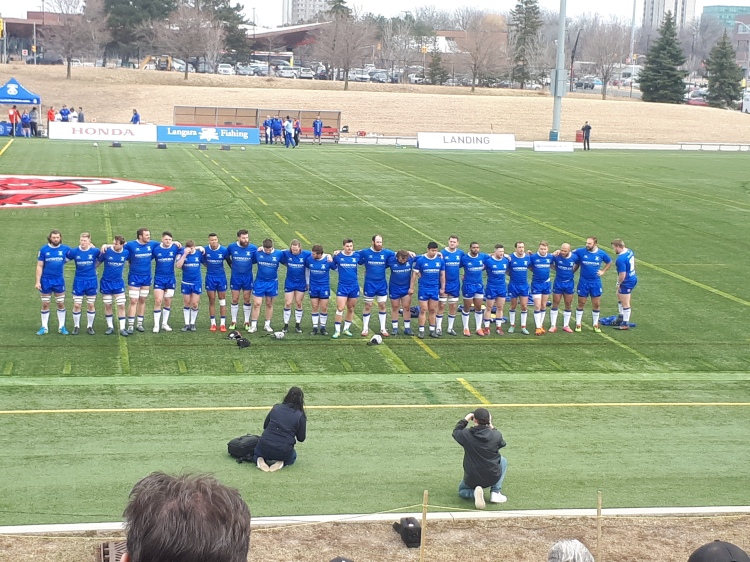 In only their second home game of the season Toronto’s Major League Rugby Franchise, the Arrows, put in a solid performance to overcome the Houston Sabercats 35-21 and put them back in contention for a possible playoff spot.

After their rousing home opener against New Orleans a fortnight ago, which saw the Arrows get edged out by the visitors in the dying minutes of a thrilling contest, Sunday’s clash with the Houston Sabercats was a much-needed tonic for players and fans alike. While the attendance was sadly only half of that of the match against New Orleans, it is hoped that the win and some sterner competition in the shape of the Seattle Seawolves will fill the stands once more at York Lions Stadium.

Once again Toronto fans will be concerned at their side’s seemingly porous defence at times in their own 22, but heartened by the fact that the for the most part they are able to stand firm in the rest of the park. Furthermore unlike in the match against New Orleans, Toronto were able to put all the pressure on the opposition in a strong final ten minutes to seal the win. Toronto had a purple patch towards the end of the first half that carried through into the first ten minutes of the second half, which saw them leak 21 unanswered points allowing Houston to draw level. However unlike the match against New Orleans a fortnight earlier, Toronto were able to regroup and stamp their authority on the remainder of the match.

Toronto got proceedings off to a flying start early on in much the same manner as they did against New Orleans a fortnight ago. Lock Kolby Francis peeled away from an effective maul to get Toronto’s first points on the board. Minutes later Toronto fans would feel justifiably robbed as the officials somehow missed flanker Lucas Rumball squeaking the ball onto the line under a pile of bodies. However, fullback Theo Sauder would make amends by touching down from a lovely floated pass out the back of the ensuing scrum. Fly half Sam Malcolm would convert and only 12 minutes in Toronto found themselves ahead 12-0.

Five minutes later after another bruising passage of play from Toronto’s forward pack, Hooker Andrew Quattrin dotted the ball down for the home side after a superb lineout drive. Malcolm converted and on the half hour Toronto found themselves 21-0 up.

The next twenty minutes however are ones the home side will most likely want to forget. Whether it was complacency or a lack of concentration, we’ll never know but Toronto took their foot off the gas and paid dearly for it. In some chaotic defending in their 22, Toronto got caught off guard allowing Houston fullback Zach Pangelinan to score a soft try.

Five minutes later and as the halftime whistle was about to be blown, Toronto were again caught napping in their 22. Houston Hooker Pat O’Toole appeared to have acres of space to operate in as Toronto simply looked on in what was some truly sloppy defence again in their 22. Two soft tries in five minutes and Houston were right back in the match as the teams headed off for the half time break.

Houston’s scrum had looked solid and clearly buoyed by their resurgence at the end of the first half, they came storming back into the second and used their strength in the set pieces to maximum advantage. Toronto once again struggled under pressure in their 22 and with it their discipline suffered allowing the Saber Cats to be awarded a penalty try. With the scores now level Toronto and their fans were left wondering how such a dominant performance in the first 30 minutes had evaporated.

However, Houston’s third score appeared to be the wakeup call Toronto needed. On the 52 minute mark, Toronto would take advantage of Houston’s continuous handling errors in the back line, and after some sustained pressure as a result of some spilled ball by Houston, Toronto’s forward pack would take up residence on the visitors’ five metre line. This would ultimately see second rower Michael Sheppard crash over for Toronto’s bonus point try.

Toronto’s defence had always looked solid in the midfield but by now they appeared to have shored up their earlier problems in their own 22. For the remainder of the match despite some concerted efforts from Houston, they would hold firm and keep the visitors frustrated and at bay. Replacement Arrows winger Kainoa Lloyd would put the icing on the cake in the 67th minute after pouncing on yet another spilled ball from the visitors, and in a 60 metre sprint that got the crowd on their feet would dot it down under the posts for an easy conversion.

Houston would continue to fight to the end, but their execution at times just wasn’t there and Toronto appeared to have recovered from the lapses in concentration that had almost undone them at the end of the first half. Houston threw the kitchen sink at the Arrows but the Toronto side held firm.

The win sees Toronto make a valuable points haul including a bonus point try, though they will be kicking themselves for leaking those 21 points when such differences come into play in determining playoff spots. Nevertheless it was an important win and one which should help build some confidence for a much tougher tussle against third placed Seattle Seawolves this coming Sunday. There is still a lot of work to do, but Toronto rugby union fans can take great heart in seeing a home-grown team that boasts so much local talent, doing so well in what should be an excellent run of home games in only their first season in Major League Rugby.

Passionate about rugby and trying to promote the global game in Canada and North America. View more posts